It all started with a phone call from Grosvenor, who run the National Quilt Championships in Sandown,  to say that my quilt All that Remains II had won not only the Theme category (A Touch of Yellow) but also Best Art Quilt and also Best in Show!! I was speechless. 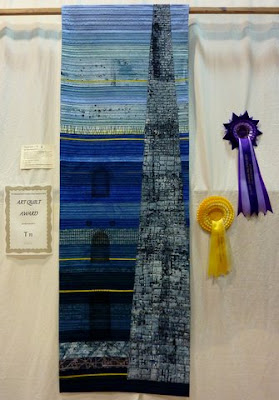 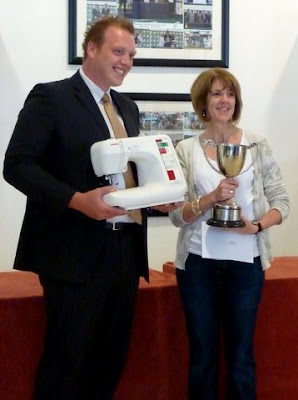 So that was on 23rd June. The following weekend we had our last ever C&G student exhibition at Odiham - of which more later - but in between I had to finish a quilt for Contemporary Quilt's Horizons challenge (deadline 1st July). Normal service has resumed, and as usual I had left the majority of the work to the last minute. The quilt in question is the third in the series of the seascape quilts. These are wholecloths, with dye-painted and printed fabric, some machine stitch and lots of hand stitch for texture. Hand stitch, unfortunately, takes ages! And once started has to be done evenly across the whole surface, otherwise distortion ensues.
So on Sandown weekend I still had approximately half of the surface to stitch. I sewed all day on the Saturday, and then till the early hours on Tuesday and Wednesday night. The final stitch went in at 3.30am on Thursday morning!

We hung the C&G exhibition on Thursday. A couple of students had had similarly late nights, but the work looked amazing and fitted the rooms at Odiham perfectly. Alongside the C&G work we displayed some of the books and sample pieces made by our first Inspiration to Stitch students, and they also put on a very good show.

The weather was improving, and to round the weekend off Saturday was Armed Forces Day in Odiham, complete with army bands in full regalia (Bearskins!), tea and cakes and picnics in the church yard, and parachuting teddy bears off the church tower! This brought people to the exhibition who had never seen this kind of thing before and we had loads of complimentary & admiring comments from visitors - both those who knew what they were looking at (who were amazed at the quality of workmanship and diversity of the work) and those who didn't (who were just amazed that you can do all that with a bit of fabric and thread). In all it was a lovely weekend.

Photos of the exhibition are in this web album


Final day of term for all three courses was last week, and Hazel and I were treated to lovely lunches by our students on three days running!

So - onwards and upwards - InStitches courses are filling up for next term - that's exciting too!

Posted by Terry Donaldson at 01:05

Labels: Sandown, Skin of the teeth productions, tin mine quilts