I think I really should re-title this blog Summer Blog - as that's the only time I seem to get around to posting! As usual it is a year since I last wrote anything. So here is a brief round-up of what I've been up to in that time . . .

We started InStitches - and have completed our first year of teaching for ourselves. Despite it being a very traumatic year for Hazel we have run three year-long courses, several shorter ones and lots of one-day workshops. Students have enjoyed dyeing, printing, sketchbooks, hand and machine stitching, and all sorts of other techniques, and all have produced some amazing work. More details on our web site here and pictures are on our blog and our new Pinterest board.  It has been a steep learning curve for us - websites, blogs, Facebook and Pinterest - and getting them all to communicate with each other; accounts and keeping the books up-to-date (not to mention tax and banks etc); sales and ordering student supplies (we only nearly ran out of fabric once!); dyeing and printing our own fabric and threads for selling at shows; advertising and promotion etc etc - and all we wanted to do was teach!!


My quilt Sussex Coast was exhibited in Contemporary Quilt's Horizons exhibition at the Festival of Quilts in 2013 and other venues, including Prague.

Its little sister, Early Morning (the quilt that was made in 14 days), was selected for the Water Water exhibition in Henley on Thames, and also went to the Quilt Museum in York with Region Three's By the Sea exhibition.

And Full Circle has been to Canada, for the Ailsa Craig Community Quilt Festival in May 2014. My quilts are better travelled than I am! 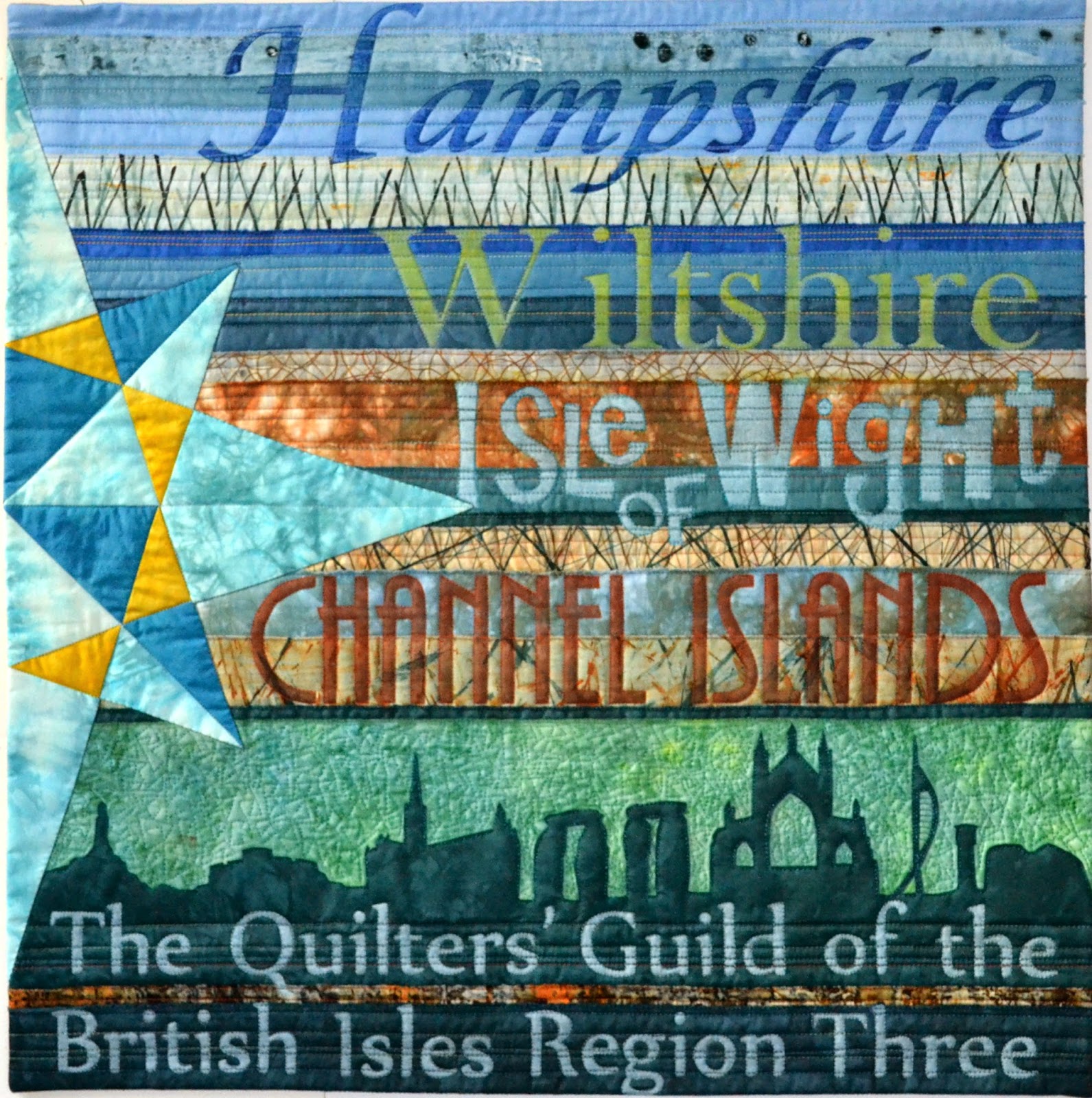 In March I was asked to make a new banner for Region Three of the Quilters' Guild, in time for the AGM which they were hosting in Portsmouth. It uses my usual technique of raw edge strip appliqué, letting the hand-dyed and printed fabrics speak for themselves. The challenge was to incorporate something characteristic of every county in the region, without making it too cluttered and keeping a contemporary feel. Eventually I decided to work with simple text and silhouettes of landmarks.

I have also been learning: last July I went on a great course with Denise Lach (calligrapher) organised by Committed to Cloth . . . and have been intending to write about it ever since! I'll write soon with some photos and the work it has influenced.

In May, Hazel and I did a fabulous week with Leslie Morgan at Studio 11 in Eastbourne, arranged by Christine Chester, exploring colour mixing with Procion dyes - loads of fuel for future work, and Leslie is such a generous tutor. More of that in a later post too.

And, true to form, in the last month I have made two new quilts and two small pieces for the QG Unfini-shed fundraiser. The new quilts are for this year's Festival of Quilts: one has been selected for CQ's Dislocation exhibition, which opens there, and the other is for the Guilds Challenge, where the theme is In my Garden. For this I really didn't want to do a 'conventional' garden quilt (I'm not good with too much green!) and did want to continue developing my coastal theme. So I hit upon the idea of having a shingle garden, like that of Derek Jarman in Dungeness, where the pebbles, rust and driftwood are the key features, with unexpected splashes of colour from extremely hardy plants that can stand up to the salt winds. I excelled myself with this one, and the last stitch went in at 5.30am, ready to deliver the next day (or should I say later that same day)! The small pieces, just bigger than A4, were really quick and enjoyable to do, and hopefully will be bought by someone who shares my passion for our coast. I'll write more about the larger pieces in my next posts but here are pictures of the two small ones.


And then there's the cycling - something I've done on-and-off over the years ever since living in Hull as a student (well it is flat there!). Hazel's influence again has finally got me back on my bike (about time too) and cycling the 100km NightRider challenge (London by night) in June. Now I'm hooked, and looking for an upgrade to my heavy hybrid bike so I might stand a chance on the hills!

So, should I have a mid-year resolution to blog more regularly, or will that go the way of the New Year type? Only time will tell . . .
Posted by Terry Donaldson at 15:18 No comments: